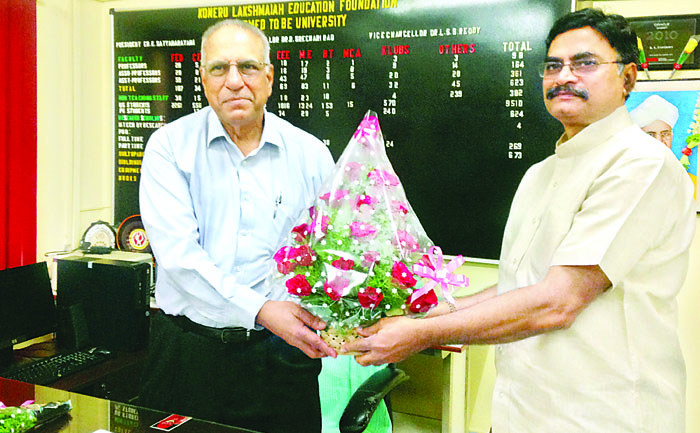 Former Central Power Research Institute (CPRI) Director Dr. M Ramamoorty has been appointed as the new Chancellor of K L Deemed to be University in Vaddeswaram of Guntur district.

He took charge as the Chancellor at the university campus on Monday.

He was a Commonwealth Fellow at U of T from 1964 to 1967. He then joined IIT Kanpur as a faculty member in the Electrical Engineering Department and became a professor in 1972. He had established the first graduate program in Power Electronics in India in 1968 at IIT Kanpur. He had supervised 12 doctoral projects and was associated with many sponsored research activities with industries like BHEL and Hindustan Steel Limited during his tenure at IIT Kanpur.

In 1977, he joined Hindustan Brown BoveriLimited (now ABB) as Chief of Research where he was responsible for the development of a number of prototypes of switchgear, relays and instrumentation.

He joined the Central Power Research Institute (CPRI) in 1983 as its first Director General. During his tenure, CPRI became a well - recognized research and training laboratory in the power sector. He retired from CPRI service in 1994 and In 1995, he took over as the Director of ERDA. After the completion of his contract in 2006 at ERDA, he demitted his office and continued as Advisor, ERDA for one more year. Under his directorship, ERDA received many accreditations and also became one of the few self - financing research
and testing institutions in the country.

During this period, he also served as a visiting professor at many universities like University of Sydney, Washington State University, University of British Columbia and many others and supervised 10 Ph.D Projects during this period. He is recipient of a number of Professional Awards. He has published 7 books on thyristors, power systems, electric machines and hydro - power generation . He holds 4 Patents and patent applications for 4 more have been sent . He is a fellow of both the IEEE and the Indian National Academy of Engineering. He has published more than 200 technical papers in reputed journals. He has been awarded the Honorary Life Membership of Society of Power Engineers for his three - decade - long contribution to the Power Sector.and received the Life Time Achievement Award from IEEMA in 2011.